A Pākehā stalwart for Māori has been honoured for her work helping those seeking employment in the cities, and those in trouble with the law.

98-year-old May Mackey has been awarded with the Queen's Medal for her support of prisoners.

She may be nearing a century but the former choir master and now Queen's Medal recipient continues to sing sweet praises.

“[I'm] elated because I've had my family around all day and that wonderful ceremony, just quite, non-showy,” she says.

May has been honoured for her work among prisoners including those held in Paremoremo and Mt Eden prisons- from the 80's over three decades.

Former Paremoremo Prison chaplain Wally Hayward says the award honours the dedication of both her and her late husband Dave Mackey.

“It was about helping and caring for those who were troubled, they worked side-by-side,” says Hayward.

“They worked tirelessly during those days, months and years.”

“I am a Pākehā from the South Island,” says Mackey, “But I fitted in perfectly, because I always had a yearning for something in that direction.”

Hayward says Mackey was a stellar mentor and supporter to young Māori. 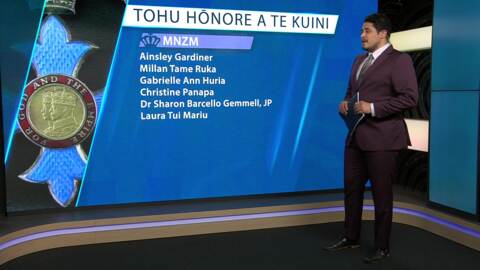