The team, aged between 10 and 16, were welcomed home with a haka pōhiri at Auckland Airport before showing off the spoils of their victory with the many friends and family who had waited patiently for their return from Dallas.

10-year-old squad member Tylar Hayes, (Te Arawa, Tainui, Rarotongan, Samoan) says of their achievement, "It's pretty cool, because no one in New Zealand has ever done it, so it's pretty amazing."

Their victory is the first time any team from New Zealand has been able to lift the sizable trophy and bring it home.

11-year-old Helaina Smith (Ngāti Oneone), who like Tylar has been cheering for just over a year, got swept away in the emotion when she heard their name called out as winners of the prestigious event.

"I was crying," she says, "We were just yelling.  I was shocked because i didn't expect to win." Mokopuna soars to success in US cheerleading championships

Marama Winkelaar, who was one of the parent supporters who travelled with the team to Dallas described the young squad's achievements as "unbelievable- to explain the amount of excitement and to see this team win is out of this world."

The NCA All Stars is one of the largest cheerleading competitions in the world.  Winkellar says more than 30,000 athletes competed at the event across 180 teams.  2 Cool managed to stand tall above them all with a near flawless performance.

Winkelaar says, "Even our coaches, Claudia and Andrei, they were just estatic.  They knew the score before it was read out.  When the second team that won with, I think it might have been 97 [percent] so they were jumping up and down, they knew we had 99 percent out of a hundred- that was an enormous achievement for us and for them."

Hayes can't wait to get back to school and share her world championship story with her friends, "I'll be famous- not really," she laughs, 'But it will be really cool!'

2 Cool will head back to America in two year's time to defend their very large and well-deserved trophy. 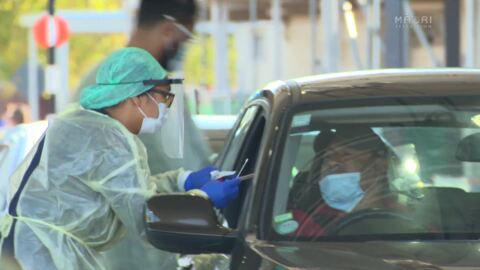