As Cyclone Cook makes its way through the central North Island, many marae in the Eastern Bay of Plenty are banding together to offer support to whānau affected by the recent floods.

170 food packs are ready for families at Kōkohinau Marae.

Kiritapu Allen (Ngāi Te Rangi, Ngāti Ranginui) says, "Everything here that you see around us today has been donated from whānau from as far as up north.  Hick's Bay yesterday we had a couple of women who had driven over, all the businesses there donated, Rotorua, all throughout the rohe."

The region is still suffering from the impact of Cyclone Debbie.  Soon, they'll be confronted with another battering as Cyclone Cook hits the area.

Whakatāne District Council has ensured that everyone is prepared.

Tony Bonne (Koromatua o Whakatāne) says, "We are trying to get people as prepared as possible for this weather event so we are telling people to get home, tie down their outdoor furniture because there is going to be high winds.  Cyclone Cook is coming from the coast so it's going to be a lot of coastal rain."

1600 people were displaced from their homes following the Edgecumbe floods.  Many people just like Tapara Reid-Hiakita have been unable to return.  She's grateful for the marae's support.

Tapara Reid-Hiakita (Rongowhakaata, Ngāti Uepohatu) says, "Our house is contaminated, it smelt as soon as we walked into it.  We will properly have to rip up out boards, see what's underneath it to also have a look in the walls all that kind of stuff so we can't see ourselves going back into our house for a few months."

Strong winds are expected to reach speeds of 120km/h throughout the North Island.

Many of the local families say this time they're more prepared for what tonight may bring. 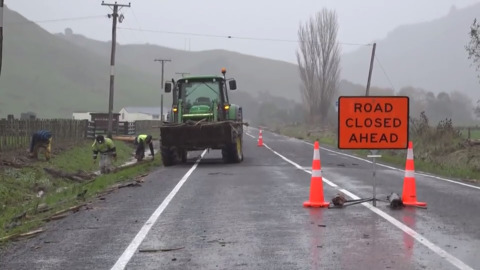