Day two at ASB Polyfest 2019 saw 13 hopeful teams take to the Māori stage for Division 3.  The competition grows stronger and stronger every year, and Ruki Tobin feels that it is also the right time to blood new judges.

"I am trying to entice young judges to come and support this event.  Especially those who have taken part in the event, who grew their skills in the language, the protocols in the culture."

A seasoned haka performer and newly appointed judge at Te Matatini, Ruki Tobin cut his teeth on this very stage and now he is giving back to the festival that he grew up in, coming back as Head Judge at the Māori stage.

"When I was first coming through, Taiaha (Hawk) was here, Paora (Sharples) and Whaea Aroha (Paenga), haka greats, were all here.  Now they are able to retire and leave the work to the younger generation to shoulder," he says.

According to Tobin, it was the likes of these people who dreamed of bringing through the new generation and he is working towards realising this by calling upon former performers of this festival to take on these roles.

One such person is former pupil and leader of James Cook's Te Kapunga, Wirihana Takuira.

"This is my first time judging.  I'm still learning, but I am also fortunate to be learning under the likes of Ruki Tobin and the other seasoned judges who are here," he says.

According to Takuira, who is also a member of the renowned senior kapa haka Ngāti Rangiwewehi, there are many challenges in judging.

"Because there is an element of analysis, sometimes it proves quite difficult to give good critique, I also have quite a sharp tongue so I have to carefully consider the words used so that it is given with respect," he says.

The Polyfest will continue for the rest of the week,  with the Division 1 teams performing on Saturday 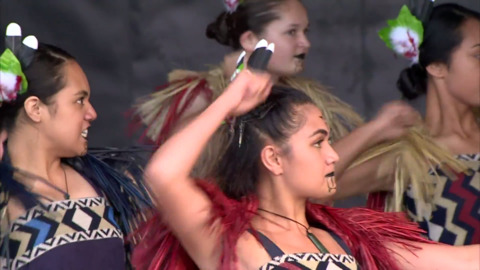