At the age of 12, Pouroto Ngaropo was inspired to follow in the footsteps of his elders, to serve the community and teach others about te ao Māori.

At almost 50 years old, he's achieved that goal and has been honoured as a Member of the New Zealand Order of Merit for services to Māori and governance in the 2019 New Year Honours.

“I’m feeling really humbled about it all and quite surprised. I certainly wasn’t expecting anything like that,” he told Te Kāea.

From a young age, he admired the way his elders looked after people and how they interacted with each other on the marae and in the community.

“I really wanted to be a part of that, he says. “I learned all the history of the elders from those tribes to be able to utilise that as an opportunity to teach and empower and share with those that did not know much about the history.” Ngaropo was brought up by his great-grandfather and boarded at Hato Petera College.

After school, he became a teacher at kōhanga reo and kura kaupapa Māori before moving to mainstream.

“I went to mainstream as a way to bring Māori values, Māori customs, traditions, practices into those different environments so that people could appreciate, respect and understand and see the beauty of te ao Māori.”

From 1994 he worked as a lecturer at Te Whare Wānanga o Awanuiārangi, and from 2003 he took on a senior leadership position as a cultural advisor.

Ngaropo is Chairperson of Te Tāwera Hapū Trust and was a driving force behind the re-establishment and upgrading of Iramoko Marae.

He has also has been Deputy Chairperson of Te Runanga o Ngāti Awa, was involved in Ngāti Awa Treaty settlement negotiations and held positions on Ngāti Awa’s Arts Council. In 2018 he stepped down as the Head of People, Language and Culture at Māori Television in Auckland where he played a key role driving the development of an integrated people, language and culture strategy since 2015.

He moved back home to Whakatāne and works as a senior cultural adviser for the Whakatāne District Council and holds the position as the chairman of Maataatua Marae.

“At this point in time, I’m really enjoying being home supporting tribal development right across the eastern Bay of Plenty.”

Ngaropo says he’s looking forward to future international travel after being invited to open and close the World Indigenous Oceanic Art Exhibition in France in March.

“There’s a lot more international experience I’m looking to be a part of in the future,” he says. 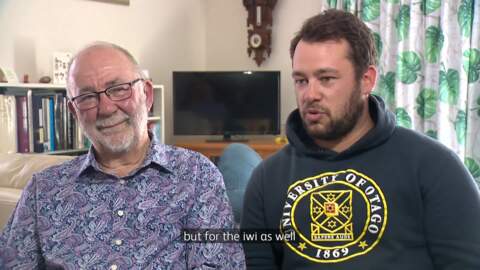